This article explains how to connect an Atmel-ICE to an Arduino Uno via the ICSP header as used in the book C Programming with Arduino. It applies to the Atmel-ICE USB programmer debugger, with part number atatmel-ice and the cheaper Atmel ICE basic, part number ATATMEL-ICE-BASIC.

Either the atatmel-ice or atatmel-ice-basic can be used with the book instead of the AVR Dragon or AVRISP mkII. The Atmel-ICE has both programming and debugging capabilities.

The Atmel-ICE Full Kit (ATATMEL-ICE) is more expensive than the basic version and has additional connectors in the box.

The Atmel-ICE Basic Kit (ATATMEL-ICE-BASIC) comes with a USB cable and one ribbon cable and is cheaper than the full kit. It fine to use the basic kit with the book as the extra connectors are not needed.

Connect the Ribbon Cable to the Atmel-ICE AVR Port

Because of the key on the connector, the ribbon cable can't be plugged in the wrong way around. Just make sure to plug it into the AVR port and NOT the SAM port or connector.

Connect the Ribbon Cable to the Arduino Uno ICSP Header

On most ribbon cables, the red wire is pin 1 and connects to a pin on the corner of the connector. This is not so for the AVR ICSP connector when using the Atmel-ICE. The red wire connects to the middle of the 6 pin connector.

An angled shot of the connection can be seen in the following image. Click any of the images to see them full size.

Angled View of the Atmel-ICE to Arduino Uno Connection

Pin 1 of the ICSP header on the Arduino Uno is marked with a small dot on the PCB silkscreen and highlighted in green in the image below. 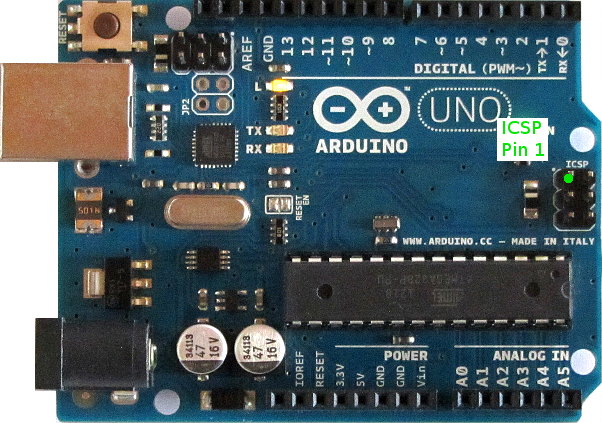 Pin 1 of the ICSP header on an Arduino Uno