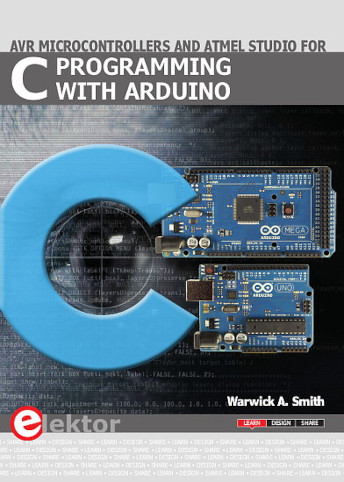 C Programming with Arduino, published by Elektor, teaches the C programming language in an embedded environment using Atmel Studio and Arduino boards. Example code used in the book runs on AVR based Arduino boards and has been tested on the Arduino Uno and MEGA 2560.

Atmel Studio is a full-featured integrated development environment (IDE) that uses the GCC C software tools for AVR microcontrollers and is free to download. Atmel Studio is used in conjunction with a programming device such as an AVRISP mkII or AVR Dragon to program Arduino boards as would be done by professional embedded software developers. When used in conjunction with an AVR Dragon, Atmel Studio provides debugging capabilities including single-stepping through C code and examining the contents of memory and variables.

The book is available from Elektor (C Programming with Arduino).